“I built the house,
I made it first in the air.
Then I raised the flag into the air
And I left it hanging
From the firmament, from the star, from
The clarity and the darkness.”

Thus, Neruda described his house in La Sebastiana poem written in 1961 on the occasion of its opening ceremony. This house built by her former owner-architect Sebastian Collado (Sebastián Collado), in whose honor it was named, will become his refuge. 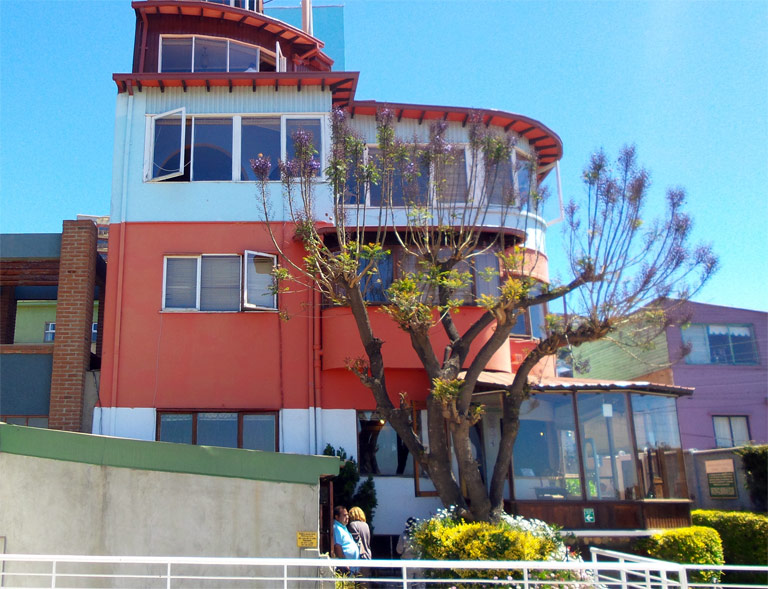 Beginning to feel a fatigue of Santiago he wanted to find a house in Valparaiso in which he could live and write in peace and quiet. The house had to be cheap, original, not great nor small, neither high nor low, lonely, but not isolated, close to shops and vehicles, with neighbors who are invisible. He found such house on the hill Florida. Since it was too big, he bought it with his friend -sculptor Marie Martner and her husband. Neruda took the third and fourth floor keep kidding that he is at a loss since he has purchased only stairs and terraces. From the biggest terrace on the third floor, he created a dining room connected to the living room. There is a large fireplace and Neruda's favorite armchair "La Nube" (Cloud), as well as many works of art, such as the wooden horse, which he brought from numerous trips where he went as a diplomat. And the Nobel Prize for Literature was given to him during one of the trips while he as an ambassador resided in France.

In the house, which walls he painted in pink, blue, yellow and green, there are kept the collection of old maps of port, old photographs, and one portrait. For a large portrait of Walt Whitman (Walt Whitman) located in Neruda's house in Valparaiso is also related an anecdote. When one of the workers asked whether this was a portrait of his father, Neruda answered, "Yes, in poetry."

On the fourth floor, there are bedroom and bathroom. In the bedroom is located a bed of bronze identical to the one in his home on the island of Isla Negra. There is the tower on the fifth floor which he turned into a study room with lots of books, a desk, and an old typewriter. In the chamber, there is a large map of America. From all over the house, which is all in windows, there is a stunning view of the bay, which is surrounded by forty-two hills. On each of them, there are labyrinths of narrow streets with houses of different colors, many stairs and beautiful viewpoints that are just breathtaking. Here as if time has stopped and it is almost possible to imagine Neruda immersed in his favorite "cloud" hovering streets of this fabulous city, following the invisible path of words that have yet to take their shapes in one of his songs.

I see the sky decorated with stars and thousands of lights from the houses clustered on the slopes of the hill, which is reflected in the water of the bay. In the mysterious sound of the waves, I sense the lyrics embedded in a piece of a small magnet of copper that half an hour before I set my foot in this creative paradise I had bought on the street stalls that sells souvenirs and handmade jewelry. I look at the words read many times before:

"Tonight I can write the saddest lines.
Write, for example,'The night is shattered
and the blue stars shiver in the distance.’
The night wind revolves in the sky and sings..."

The breeze whispers waking me from sleep. I find myself in a beautiful garden, full of flowers and palm trees where you still feel the presence of the Chilean writer, poet, philosopher, politician, and diplomat, as it says on the memorial plaque put here by the Representation of Buenos Aires on thirty-five years of his death. I'm sitting on a bench, completely immersed in this unrepeatable moment in the city that forever enchanted me, and then from the terrace, I'm watching a long time the bay, the width of the ocean that calms every restlessness.

Attractions and specific features of the first Chilean ports" 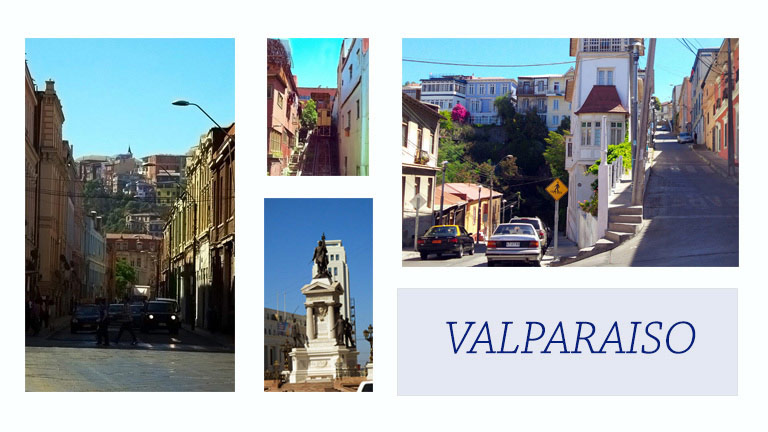 Valparaiso has about 250000 inhabitants. It was founded in 1536, and it was the first and most important Chilean ports. Before the opening of the Panama Canal, it was an unavoidable point for all ships coming from Europe. In Valparaiso, there are Maritime School and Maritime Museum. Since 2003, the upper part of the city is under the protection of UNESCO. One of the peculiarities of this town are its elevators. They are the primary means of transportation for those who live in the hills, and for the visitors, they are one of the most unusual ways to get to know the city enjoying at the same time the view. Elevators "Queen Victoria" (Reina Victoria), El Peral and Concepcion (Concepción) are declared historical monuments as well as buildings: the Anglican church of "San Pablo" and Baburica Palace (Palacio Baburizza) from 1916, in which today is the Museum of fine arts. These monuments together with renovated old houses that have been converted into hotels make this part of the port so impressive.

The name of passage where the Palace Baburica is located is Paseo Yugoslavo (the former name was the Paseo Americano) by Mr. Baburice who is originally Dalmatians. After the breakup of Yugoslavia, the Croats wanted to change the name of the Passage into Paseo Croata, but Chileans rejected the proposal after voting in Parliament. It is interesting that Parliament is located in Valparaiso and not in Santiago, which is the capital of Chile.

Paseo Yugoslavo, Paseo Gervasoni in which is the house-museum of cartoonist Lukas and El Paseo Atkinson, where street artists gather depicting scenes from the bay, are the three pedestrian passage with a beautiful view of the gulf. While I descend the Paseo Yugoslavo enjoying the imaginative scenes of mural decoration, an ornament of this passage that blend with colorful facades, which, as poor out from the canvas rush toward the horizon which in the distance connects the sky and the ocean. That sight is the best at the end of this passage in the front of the Baburica palace, where I stop myself for a moment. This unusual architectural structure resembles a bit of a box of chocolates from a fairy tale "Hansel and Gretel" and wake up extraordinary impressions before which the one widen pupils in wonder as a child. 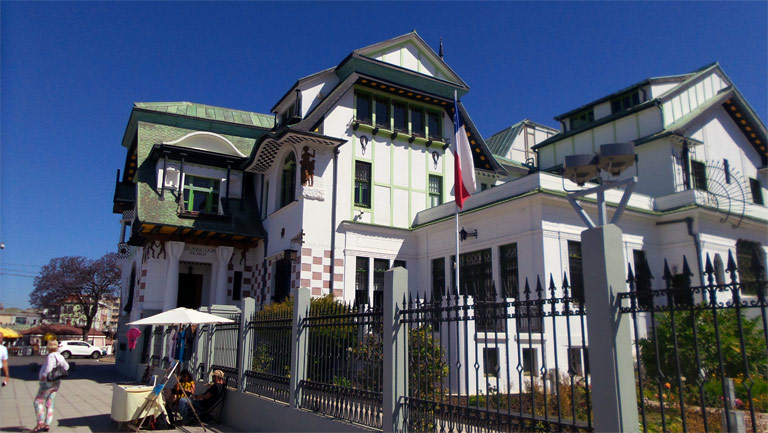 La Plaza Sotomayor presents the heart of Valparaiso. There is a monument dedicated to the heroes of the Pacific War- Heroes de Iquique (Héroes de Iquique). I go down to that place by one of the elevators, enjoying the secret that I shared with the residents of this city participating in the ritual journey. The buildings that surround the square are part of the cultural and historical heritage. On the market, there are numerous bars, restaurants, and places where they sell art and craft handicrafts. Between this square and the square Victoria (La Victoria Plaza) there are buildings of high artistic value: El Reloj Turri from 1929, the building of Mercury (El Mercurio) from 1901, Ross Palace (Palacio Ross) from 1890 and the Museum of natural history or the Lion Palace (Palacio Lyon) from 1881. Lift El Espiritu leads from Victoria Square to the Museum of Open Sky (El Museo de Cielo Abierto) which one must visit, as well as the church Matris (Matriz) -the oldest church in the city (from 1559) and the cemetery of dissident (El Cementerio de Los Disidentes) on the hill Pantheon (Panteón) where is mausoleums from 1827.

The house in which the Chilean poet found his haven, which offers a magnificent view of this beautiful city, today represents a cultural center that hosts exhibitions, conferences and poetry circles. Although the house was devastated during Pinochet, it was restored by his wife and turned into a museum, as well as his other houses. Neruda left everything he had to the Chilean people, as well as the foundation that funded the young poets. In the Cultural Center La Sebastiana one can buy his books, such as: "100 sonnets about love" and "I confess that I lived."

With books in hand I am leaving this haven, and while the bay in front of me the last time appears in all its beauty, it seems like I hear typing on the old machine. I sense the mystery of creation forever trapped in the silence of the bay in which reflect all those unwritten poems that this magical city will keep for a long time.